Logitech G903 LIGHTSPEED vs Logitech G900 Chaos Spectrum – let’s review the main differences and decide which one is better for gaming. Keep reading to find out how these two compare in their optical sensors, DPI, weight, design, connectivity, and price.

There is absolutely no difference between the DPI of these mice.

There are many similarities between the two however G903 features the LIGHTSPEED technology which provides a much better connection between the PC and the mouse.

Furthermore, LIGHTSPEED can also increase the range of the mice so if you’re using G903 for your multimedia system then you won’t necessarily have to sit close to your PC.

Logitech G900 and G903 pack the same specs and there’s almost no difference in the performance of these gaming mice.

There is almost no lagging or smoothing and provides much better accuracy than most mice in the market.

These mice are also equipped with 32-bit ARM microprocessors which are responsible for an amazing 1ms response time.

If you spend most of your time playing multiplayer games then you can definitely count on these mice.

There’s almost no difference in the design of these mice and both are almost 100% identical.

The top looks the same but there’s a difference on the bottom side. Logitech G900 has an on/off button and some covering for better grip.

However, Logitech G903 has space for detachable weights and magnetic wireless chip if you’re using the POWERPLAY wireless pad as well.

Other than that, there is almost no difference between their designs. Both mice have a very strong grip and can provide some solid performance.

The only difference between these mice is their specs and other than that, everything else seems to be identical. Logitech G903 & Logitech G900 are very suitable for both, right and left-handed gamers.

Weighing at 110g (3.8oz), Logitech G903 LIGHTSPEED is indeed one of the best light-headed mice that provides an excellent grip with matchless performance.

Logitech G903 comes with 10g optional weight that a user can attach with the mouse to increase the weight and find the sweet spot.

The weight of the Logitech G900 Chaos Spectrum is 107g (3.7oz) a little lighter than G903. Logitech G900 features the same design as G903 and provides the same matchless grip backed with excellent performance.

A user will not experience any smoothening and the accuracy is through the roof. Furthermore, many gamers believe that having a mouse pad can really boost the overall performance of a mouse so it’s believed that it’s better to use a mouse pad as well.

Logitech G440 Gaming mouse pad is definitely among the best.

Logitech G903 LIGHTSPEED is a completely wireless mouse that features the most advanced ‘LIGHTSPEED’ wireless technology from Logitech.

The response rate of G903 is 1ms which is really good.

Connectivity is always a problem with some wireless mice but you can expect good numbers with this one.

On the contrary, we have the Logitech G900 Chaos Spectrum which is one of it’s kind and features both, wired and wireless technology.

A user can play with wired G900 by plugging the data cable and also can play wirelessly with the default mode.

Some gamers like to play with wired mice and hesitate before buying a wireless mouse but if you’re one of them then go for Logitech G900 Chaos Spectrum to enjoy both, wired and wireless gaming.

However, only Logitech G903 LIGHTSPEED can support ‘POWERPLAY Wireless Solution’ which means that you won’t have to plug your mouse ever because it can wirelessly charge itself.

Moreover, Logitech G900 Chaos Spectrum does not support the ‘POWERPLAY Wireless Solution’ and you will have to manually plug the mouse to charge.

However, the ‘POWERPLAY Wireless Solution’ is not free and you have to pay extra to get your hands on it.

Both, Logitech G903 LIGHTSPEED and Logitech G900 Chaos Spectrum are available on Amazon and you can easily buy them.

The Logitech G903 is slightly more expensive than Logitech G900 because it features the latest technology. 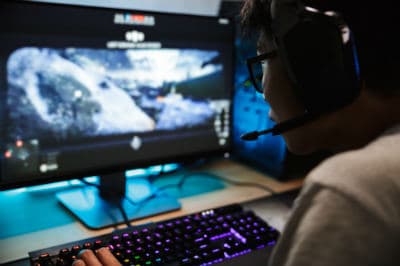 Logitech G903 is an amazing mouse with a smooth design and up to 11 customizable buttons that can also be removed so there’s a lot of room for flexibility.

It is deadly fast and very accurate. Logitech G903 LIGHTSPEED also supports the ‘PowerPlay’ wireless charging as well which is a game-changer for many of us because we hate plugging our mouse over and over again.

Overall, Logitech G903 LIGHTSPEED is a must-have and can actually provide the gaming experience it promises.

Logitech G900 Chaos Spectrum is one of its kind mechanical gaming mouse that also features almost 11 customizable buttons that can be removed or replaced.

The optical sensor is flawless and the connectivity is really strong as well.

The most admired thing about this mouse is its perfect grip that can prove to be really excellent.

However, Logitech G900 Chaos Spectrum does not support the wireless charging which is the only downside to this mouse.

Other then that, Logitech G900 is a dream come true for many gamers out there.

Logitech G903 LIGHTSPEED and Logitech G900 Chaos Spectrum are quite reputable mice and they bear the specs to outperform many of their competitors.

Both of them have the same smooth design that is appealing to almost everyone.

Now, the choice is all yours! If you want a mouse that comes with wireless charging and you’re not on a tight budget then go for G903.

However, if you’re on a budget then I’d recommend you go for G900 because it can perform same as G903.