Valentine’s Day quickly approaches! If you’re like me, you have a hard time trying to come up with something unique for that special someone. If you have a Geek in your life, this can be a real challenge. Today, I would like to show you some unique and fun gifts that you can get for your Geek and not break the bank!

Show them your undying devotion by giving them this HEX encoded love poem shirt. This is especially good for the graphic designer/web design Geek in your life. 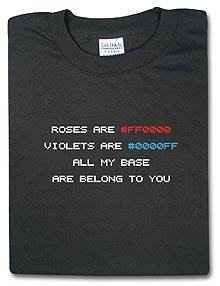 For the Star Wars fan in your life, here is a great place you can print your own Star Wars Valentines. How cute is this! Plus, it’s free! I call that a win win!

Speaking of Star Wars, what Star Wars fan wouldn’t want a Han Solo in carbonite chocolate bar? Let’s just hope they don’t make a Jabba the Hut if you know what I mean. Yuck! 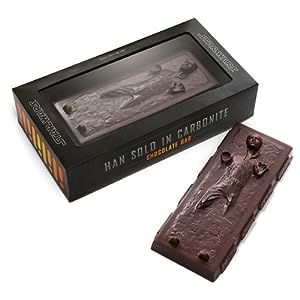 I Love My Geek Babydoll Tee by ThinkGeek

This shirt is perfect for the girl who appreciates her Geek! 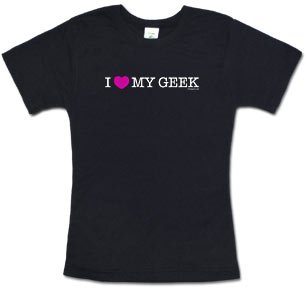 This lamp will surely set the mood for you and your Geek. Gaze into each others eyes under the soft glow of this color changing LED lamp. It has bendy legs so you change it to look just the way you want. 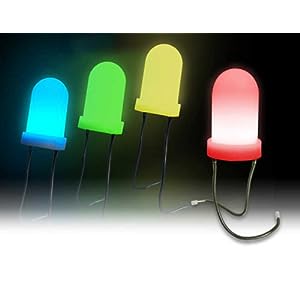 I hope I have inspired you to think outside the box a little. Most of all, Geeks just want to have fun. You don’t have to throw away tons of money this Valentine’s Day. Just add a touch of quirkiness to your gift and I am sure your Geek will enjoy it! Good luck!

A few days ago, I pointed out that GeekTool, one of the most powerful customization tools available for the Mac, is now available in the Mac App Store. I promised in that article that I would do a short write up on how to use GeekTool. I know that it can be a daunting task for those who are new to the application. That’s why I have decided to show you how to set up a simple geeklet.

The geeklet, which is what you get when you place a GeekTool script on your desktop, that I am going to show you is a simple clock. It will display the time in 12 or 24 hour format based on your clock settings. It is essentially a desktop clock that shows a mirror of what is on your internal clock. Here’s how to do it.

If you did everything correctly, you will now have a working GeekTool clock on your desktop. You can move it around you desktop to wherever it works best for you. Mine is in a speech bubble in my Doctor Who comic desktop. I’ve seen them carefully placed behind image geeklets, as backgrounds and even made gigantic. The only limit is your creativity.

If you want to find more unique geeklets, I recommend you check out Mac OS X Tips. They have a great database of cool and unique uses for GeekTool. If you have any questions or comments, feel free to leave a note in the comments below.

For as long as I have been using computers, I have been obsessed with customization. I themed all my machines growing up, giving them looks that made my father crazy. I would turn my desktop into the control deck of a Sci-Fi space ship, or give it a pirate feel. When I first bought my Mac, I thought I would never be able to do anything like that again.

Boy was I wrong.

Quickly, I learned of a huge community of Mac customization fiends, and made myself one of them. I learned the tools of their trade, including BowTie and Photoshop. Then, I dove deeper into the scene and discovered GeekTool. Once I learned its secrets, I could make my Mac desktop much more personal than any Windows machine I had ever owned.

If you aren’t familiar with GeekTool, then you are probably missing out. It allows you to create simple bits of code or images that exist on your desktop. While that sounds a little boring, allow me to assure you that it isn’t. You can create working clocks, rolling tickers for stock information, and even constantly updating weather information. The possibilities are almost endless.

Now, I have some really good news for old and new GeekTool users. Tynsoe, the developer behind GeekTool, has released it into the Mac App Store. This means that you no longer have to hunt it down on the internet, install it manually, and then try to keep it updated by yourself. The Mac App Store will take care of all those messy parts for you, leaving you to play with your new customization toy.

I know that many are wondering how to use GeekTool effectively, and I promise that I am working on a handful of posts on just that subject. Keep your eyes peeled and your tabs open to Techie Buzz to find out more. Until that happens, take a look at my GeekTooled desktop, featuring the great Sci-Fi series ‘Doctor Who’.

Have you ever had to help someone with their computer over the phone or using text chat? It’s not easy. You can’t be sure that they are in the right place, doing what you want them to do. That’s why remote desktop (screen) sharing applications are so great.

These applications are called by a variety of names such as, remote access, remote support, remote desktop, screen sharing, and desktop sharing. The main idea behind them is that they allow one computer to see another computer’s screen over a network or the internet.

My wife and I have many friends and relatives that come to us for PC help and advice. We’ve used a number of desktop sharing apps over the years and discovered that TeamViewer is one of the best, and it’s free!

Since I’ve been spending a lot of time using Linux lately, I was happy to find that TeamViewer is also available for Linux, as well as Windows, Mac and Smartphones. It’s almost as good as being there, because I can control the remote computer as if I were sitting directly in front of it. When I need to, I can change the direction to show my PC’s screen to the other person. It even makes it easy to share files with the person on the other end.

This image below shows how simple it is to set up. (click image to enlarge it)

One thing I can say about an Apple product is that the product’s design and build are absolutely top-notch and Apple takes good care of making sure that their products are nothing but the best.

With so many Apple products out their including Mac Book Pros, Mac Air, iPad, iPhone 4, iPod Touch and iPod Nano you can expect them to come up with several more products which re-define the way we look at the products.

While Apple is busy preparing for the launch of iPad 2, a satire site called Scoopertino; which produces fake Apple news, has gone ahead and created a new Apple product called Apple Water or iWater as we would like to call it.

Take a look at the latest product from Apple (click to enlarge image). For more such Geeky fun about Apple, visit the site at http://scoopertino.com/.

If you haven’t heard about the Social Network Movie, you ought to go and watch it once. It is a movie roughly based on the life of Facebook founder Mark Zuckerberg and how he built an empire of 500 million users.

So what do you think? Was this better than the original Social Network movie?

If you have been reading tech news today, you might have come across the news that Facebook was speculated to be building a Facebook phone but later denied it. Trust the Internet to make fun out of news like these and come up with some really tacky things, remember the iPad announcement?

So, if you are up for some fun, here is the first photo of the Facebook Phone created by Sean Percival, all the Pun intended

(More from The Creator)

Ok, shouldn’t we have stopped with jokes about the iPhone 4 Antenna issues already? Yes, we should have, but I just couldn’t let this pass away as it definitely made me laugh out loud.

Here is a conversation (manufactured) between Steve Jobs and Bill Gates where Steve Jobs tells Bill Gates that he is being sued because of the iPhone 4 and the hilarious response from Bill Gates.

(Image via Wild Ammo via @J3rwin)

Remember Hitler’s take on everything and anything cropping up on YouTube? Well, if you don’t this link might help. Now, when iPad initially came out there were a lot of jokes about the name Steve Jobs chose for the device, however, there haven’t been much parodies about the device.

But like always, there is always a geeky fun element to any device or software and I want to introduce you to one such parody of iPad.

Adam Buxton, an English comedian has come up with a iPad parody which involves a Star Wars iPad Briefing, Steve Jobs style. The video in itself is funny and mocks Steve Jobs on stage doing an introduction of the iPad.

Interested in watching it? Well just hit the play button in the video below.

By the way, you can read all about Adam’s inspiration in creating this video at this personal blog here. Oh and do share any other parodies you have seen for the iPad through your comments.

Oh we all love our iPhone and iPod Touch, but how about sleeping in one? Well, "There is a Bed for It" :-). Take a look at the iPhone/iPod Touch bed below with comforters and pillows included.

Before you ask, this bed iPhone or iPod Touch bedding is really sold by Ellos for $49, too bad that it has been sold out now. However, you can always try to buy one here. More info at Ohdeedoh. Thanks @labellagorda.