Day one of Google I/O 2012 has just ended and we’ve got some cool announcements including the Nexus 7 Tablet, Jelly Bean and Nexus Q. These new additions are currently heavily dominating Twitter and Facebook streams.

But in this midst of major announcements, there is a new feature in Jelly Bean that is not getting any attention — ability to mute notifications from specific apps! 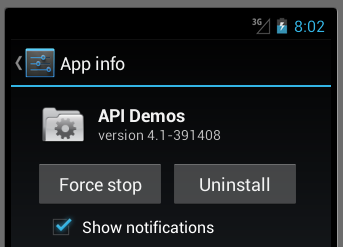 Advertisements in the notification window has been always an annoying problem, especially Airpush advertisements, which has often sparked rage among Android users. Thankfully, Google has a plan with Jelly Bean to combat this nasty problem and that is by letting users turn off notifications for specific applications.

This feature is one of those several new features that were not announced in the live presentation, but have been left for Android users to find out themselves. Credits for discovering this handy feature goes to a Reddit user who found this option in application settings in an Android 4.1 Jelly Bean Emulator.

Looks like Google has added another functionality to notifications. Starting from Jelly Bean, users will be able to long-press a notification to discover which application posted it. In my opinion, it is a really nifty feature to tackle obtrusive notification ads as users will now be able to know which particular application is behind all those ads and even uninstall them if needed.