Hot on the heels of the v25 firmware update for their Symbian^3 phones, Nokia has started rolling out a ‘performance’ pack for their handsets. 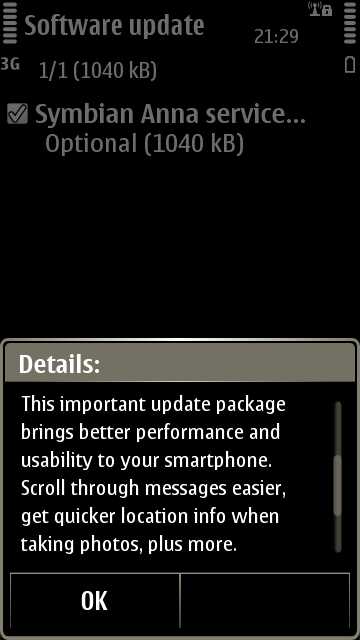 As the name suggests, the  ‘performance’ pack aims at improving the performance and stability of the phone and its core apps. The change-log states an improvement in the email app, improved GPS performance and ‘more’. The update is an application level update, and not a firmware level update. Thus, the firmware version of your phone will remain the same post the update.

Users who have already installed the update reported an improvement in the performance of the email app, along with an overall performance improvement. The update is available via OTA (Over-The-Air) as well as via Nokia Suite. Go to the Software Update app on your Symbian^3 phone to download and install this 1MB update.

This performance update is available for all Symbian^3 handsets running Symbian Anna, including the Nokia N8, C7, C6-01 and the E7.

Head over to AllAboutSymbian for more information and discussion about this ‘performance’ update.

Rajesh is a 19 year old nerd, currently pursuing B.Com Hons from Bhawanipore college in Kolkata, India. He loves everything tech, especially Android. You can follow him on twitter @ePandu or mail to him at [email protected] View all posts by Rajesh Pandey