Today is Firefox’s 5th birthday and Mozilla is celebrating with its Light the World with Firefoxcampaign. Firefox 1.0 was released on 9 November 2004. It was a tiny browser which dared to dream big. And today, it is well on its way to realize its ambition. Firefox currently has more than 330 million users and is the second most popular browser (behind Microsoft Internet Explorer). 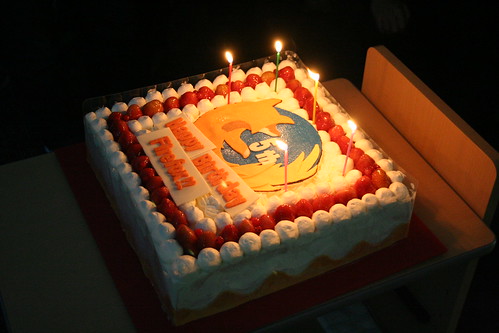 Mozilla communities are hosting parties all over the world to mark this occasion. As a part of the Light the World with Firefoxcampaign, they will be shining the Firefox logo from Tokyo to Rome, from Paris to San Francisco, and more. For information on the planned celebrations head over to www.spreadfirefox.com/5years/.

Firefox has certainly accomplished a lot. It has managed to snag nearly 25% market share, is available in more than 70 languages and has more than 70,000 extensions. Most importantly, it succeeded in breaking Microsoft’s slumber and forced them to improve Internet Explorer.

What about the next 5 years? Christopher Blizzard shared some of his ideas at hacks.mozilla.org:

Happy Birthday Firefox and thanks for promoting web standards and trying to fix the broken web.

Pallab De is a blogger from India who has a soft spot for anything techie. He loves trying out new software and spends most of his day breaking and fixing his PC. Pallab loves participating in the social web; he has been active in technology forums since he was a teenager and is an active user of both twitter (@indyan) and facebook . View all posts by Pallab De